Hello all. Before I post up my next review, I just have a couple of quick announcements to make. First, be sure to look at my sidebar for my updated e-mail address. Second, I have created a channel on Youtube for future video breaks. The channel can be viewed here:

There are no videos up yet, but that will change soon, possibly as soon as this weekend. Until then, I have one more review to post. The review will cover a box of Topps Finest from a few years back that yielded two Hall of Fame autographs and plenty of other goodies. Be sure to check back soon…

A couple days ago, a few cards that I had earned via a group break, arrived in the mail. The break, conducted by The Truth17 on Youtube,  was held on Thanksgiving and featured boxes of Ultimate Collection, Exquisite Rookie Signatures, and Premier baseball. I drew two teams, the Blue Jays and Twins. While Toronto got shut out, Minnesota did very well, as you can see. My haul consisted of:

Do yourself a favor and check out/subscribe to Chad’s Youtube channel (link above). His videos cover everything from box breaks to maildays to PC showcasing, and even include a tutorial on how to throw a baseball (those of you with kids who play should watch). It should be noted that he has played professional ball for affiliates of the Braves and Rays. As far as the group break was concerned, it was the first he’d hosted on Youtube. It was a fun break and Chad was very professional through the whole thing. A big thumbs up to him. If anyone wants to trade, let me know.

Nowadays, SPx is an overpriced product that guarantees (for the most part anyway) nothing more than a handful of bland, single-swatch jersey cards and no-name prospect autographs in each box. Normally, products like these are the type that I just feel indifference to and avoid. However, after witnessing a recent group half-case break of 2007 SPx run by “arplatinum” on Youtube, the indifference has turned into utter contempt. Out of a 5-box lot, they pulled a few notable cards: Cal Ripken, Jr. Iron Man 1/1 insert, Justin Verlander autograph, Ryan Zimmerman patch /99, and an Akinori Iwamura autograph (RC) to go along with the occasional unlisted star jersey or minor star autograph. As far as patches are concerned, they are supposedly inserted 1 per box on average. The patches pulled were of Ivan Rodriguez, Justin Morneau, Ryan Zimmerman, Jim Edmonds, and Chase Utley (I believe that’s who it was, couldn’t tell by the picture). On 2 of these 5 cards, regular jersey swatches were inserted instead of patches. Are you kidding me?!? It’s bad enough that the Cal Ripken “1/1” (of which there are thousands) was the best pull out of FIVE BOXES, but this is ridiculous. For that kind of slip-up to happen twice is total crap. I have to hand it to arplatinum though. Check out his reaction when he found the Utley, the second of the “patches.” I applaud him for not swearing up a storm at UD’s lack of quality control. By the way, he’s a real stand-up guy and his videos are awesome. I encourage you all to check them out. 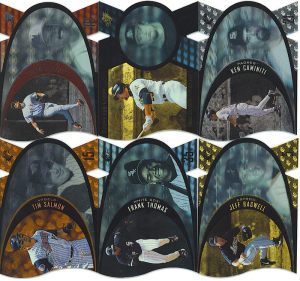 However, SPx wasn’t always a big autogamer mess. If you’ve been reading my blog, you can easily see that the late-1990’s was largely about introducing new technologies to cards. SPx was no different. SPx burst onto the scene in 1996 and started as a single-card pack (well, at least it wasn’t UD Black). These cards were die-cut all around the perimeter and featured a hologram photo of the player, as well as a regular photo. There were 60 cards in the set. A gold parallel and autographs of Ken Griffey Jr. and Mike Piazza were randomly inserted. In 1997, SPx returned with a slightly shorter base set and a LOT more parallels. In fact, every pack guaranteed to have at least one parallel. I know some people find parallels to be annoying, but I’ve always had a fondness for them, as well as this product in general. I recently came across a box of these online for about 25% of the price of a box of 2008 SPx and just had to bust one. Here’s what I pulled…

Base cards: The base cards are once again die-cut, but in the form of an “X” with a protruding oval where the player’s hologram is. There are only 50 cards in the basic set, but when you consider that there are only 54 total cards in the box (18 packs, 3 cards each) and a ton of them are going to be parallels/inserts, at least one more box would be needed to finish the set. I received 34 base cards with no duplicates. One downside to this set is the lack of rookies. I believe the only RC in it is that of Jose Cruz, Jr.

The stated odds of finding a parallel is 1:1. This applies to the Steel, Bronze, and Silver ONLY. The Gold and Grand Finale parallels have their own separate odds. With that said, here are the parallels:

Silver: I received 4 Silver cards in this box. Two were of Ken Caminiti and two were of Gary Sheffield. Seriously. I got 2 players in this set and each came with a dupe. Great collation, UD!

Steel: For some reason, I pulled as many Steel cards as I did Silver and Bronze COMBINED. Yep, 9 in total! They were: Nomar Garciaparra, Mo Vaughn, Sammy Sosa, Frank Thomas, Albert Belle, Larry Walker, Manny Ramirez, Jim Thome, and Tony Gwynn.

Gold (1:17 packs): Like I said earlier, the Gold parallel has its own stated odds, about 1 per 18-count box. My card was none other than Jeff Bagwell.

A QUICK NOTE ABOUT THE PARALLELS: One can determine the parallel they have by looking at the “X” die-cut. Notice how in the scan of the Silver Caminiti, the “X” finish looks just like the Bronze and Silver. There is no holographic treatment outside the player’s “window.” On the Steel parallel of Frank Thomas, it is very evident that the holographic style extends outside the player window and into the “X.” Also, it should be noted that all of these parallels are completely colored on the back. Frank Thomas and Albert Belle have base card designs that look like a steel parallel. The only real way to tell them apart is to see the back of the card. If the back photo is in color, it’s a base card. If the back photo is colored gray, it’s a parallel. I, myself, had to do a double-take when pulling base cards of those two. I thought I had even more parallels than I did!

Bound For Glory (limited to 1,500): My final insert was entitled Bound For Glory. This card looks like the base cards except for the fact that the player’s regular photograph is surrounded by gold and the hologram photo is located inside a circle as opposed to the oval-like figure. Each card is limited to just 1,500. I pulled a Mark McGwire.

What WASN’T Pulled: First off, there was one parallel mentioned before that I didn’t pull. This was the Grand Finale. Of course, this was aptly named as SPx would halt the hologram cards after this year. These cards looked similar to the Gold parallel, except for the fact that there was a gold tint to the hologram as well. These cards are limited to just 50! Secondly, there’s an insert called Cornerstones of the Game. This was a 10-card insert set that featured pairs of superstars, most of whom shared a common position. Some of these combinations included Mike Piazza/Ivan Rodriguez, Alex Rodriguez/Derek Jeter, and Mark McGwire/Mo Vaughn. These were limited to just 500. Lastly, there were five subjects from the Bound for Glory set who had autographed cards! These players were Jeff Bagwell, Andruw Jones, Alex Rodriguez, Gary Sheffield, and Ken Griffey, Jr. They are limited to just 250 and they sure don’t show up often!

Final Thoughts: Although I hate the newer versions of SPx (well, their base set is alright, but who really cares?), 1997 SPx reminds me of how cutting-edge some products of the 1990’s were. Sure, they led to some stupid, forgettable products, but they also ushered in some cool concepts still used today. This box was a fun one to rip, but again, parallels are somewhat of an acquired taste in this hobby. This box provides lots of great-looking cards, cool technology, and a chance for some rare inserts and even superstar autographs. The best part is it costs the same as about 2 packs of 2008 SPx. I don’t know about you, but I’d rather pull some sweet old-school SPx inserts than some crappy Aaron Rowand jersey anyway.

As always, thanks for the read and good luck with your own breaks!
-John