As promised, here’s a box break/review of 1999 Flair Showcase! In case you didn’t already know, pre-2000 Flair are some of my favorite sets ever. Just look at the scans below. They are beauties! For past Flair box breaks (’98), click here and here. Anyway, let’s see what my first box of ’99 brought me…

Base set: 1999 marked the last time that the Flair Showcase set was fractured. In this case, 144 players each had three cards each, Rows 1, 2, and 3. The scan above depicts cards from Row 3, the most common of the bunch. In this box, I pulled 71 Row 3 cards without duplicates.

Row 2: The Row 2 cards came at a rate better than one per pack. In 1999, the look for these cards was tweaked a bit from those of previous years as the players no longer had their distant background images but rather a small action shot placed under a giant model of their uniform number. The number concept might seem a bit tacky, but the cards are beautiful regardless. I pulled 40 different Row 2 cards in this box. Some of the notables included Mark McGwire, Cal Ripken, Jr., Vladimir Guerrero, Ivan Rodriguez, Pedro Martinez, Curt Schilling, and Mike Mussina. 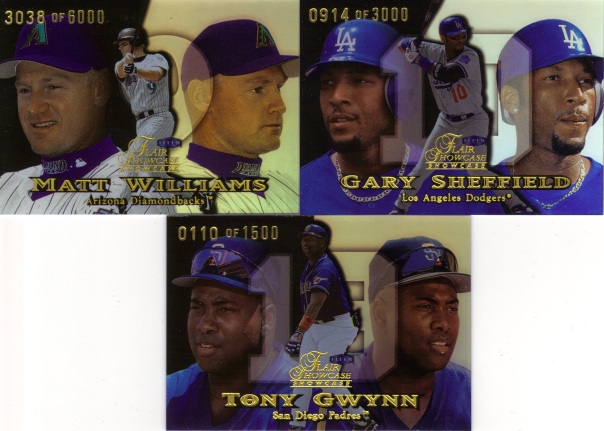 Legacy Collection (/99): The low-numbered, blue-foiled Flair parallel known as the Legacy Collection returned in 1999 and mirrored all three Rows with a print run of 99 each. I was unable to pull a Legacy card in two boxes of 1998 Flair but I was able to hit one here in Andres Galarraga (63/99).

Wave of the Future (/1000): A staple of the Flair Showcase line, this year’s Wave of the Future inserts returned with a special technology later used in Fleer’s E-Xceptional inserts. I pulled an insert of Troy Glaus (0979/1000). Ben Grieve, Travis Lee, Todd Helton, Eric Chavez, and Ricky Ledee are among the others featured in this set.

Collation: A
This box didn’t contain a single duplicate and I actually got two more cards than I was supposed to (122).

Condition: C
While the base cards were relatively unharmed, the inserts had some serious issues. Some Row 1 cards suffered from serious peeling around the edges on the back. Also, check out the faded foil on the Legacy logo on the Galarraga card. This was a bit disappointing.

Pulls: B
The pulls earn a solid ‘B’ thanks in part to the Legacy card. From past experiences, I know that these aren’t guaranteed pulls. Overall, the star power in this box was above average.

Value: B
The asking price of these boxes are regularly in the $55-60+ range. At $45 (again for those that will ask, I don’t include the shipping in the prices I list because I often buy boxes in bunches and don’t calculate how much I spent on each), the box is worth it for the slick look of the cards alone. Throw in some awesome inserts and hard to find parallels (including possible 1/1’s) and this box is a winner, assuming several of your inserts don’t get damaged. 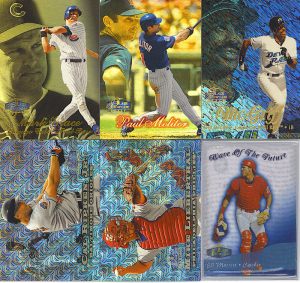 Well folks, I apologize for the lack of new content recently, but things have been crazy around here. The good news is that I will have plenty of new reviews up in the near future. The bad news is that the boxes are taking a long time to get here! They’ll be worth the wait though. One of them, will not a be a box, but rather a vintage pack that A Pack a Day fans will appreciate. Until then, here’s a Flair Showcase box break to hold you over. If you didn’t know, 1998 Flair Showcase was my very first review on this site. One thing I failed to mention then was that I had broken another box of Showcase, just prior to that post. Ironically, this box was busted before that one in my debut post (this was before I even started this blog) so technically this should be box number 1 and that other should be box number 2. Eh, screw it, here’s what was pulled….(Check the original post for in-depth descriptions)

Row 3: This box yielded 73 Row 3 cards, with 2 dupes. The other box had 78 cards with 1 dupe. I should be close to finishing this set, but the last 30 cards are slightly shortprinted. I still have to figure out how many of these exactly I need. I got lazy, sue me.

Row 2: I pulled 30 of the Row 2 cards, which was 1 more than I had in the other box. Some of my notable names included Greg Maddux, Chipper Jones, Manny Ramirez, Paul Molitor, Jim Thome, and Curt Schilling. I doubt I will try for this set so if anyone is looking for a certain team, I’ll gladly search for you.

Row 1: There were 10 Row 1 cards in this box, again 1 more than the other box. The notable players here included Sammy Sosa, Fred McGriff, Jay Buhner, and Robin Ventura. Again, there are all available if anyone needs them.

What WASN’T Pulled: Neither box contained a Legacy Collection parallel, Masterpiece parallel, or Perfect 10 card. The Perfect 10 cards are limited to 10 (with only 10 cards in the set) and as you probably know, the Masterpieces are all 1/1’s, so it’s not surprising I didn’t pull any of these in my boxes. However, neither one contained a Legacy Collection parallel, which was a little bit of a surprise to me. There are no stated odds on these, except for the fact that they’re limited to 100. I figure these probably fall in every other box or so, given the production totals compared to the 1997 version.

Final Thoughts: This is a fairly difficult box to obtain, and can be pretty pricey. I’ve seen a couple of these in ebay stores for close to $100, but was able to pick these up for about half of that. The cards are absolutely beautiful, but the fracturing of the set may drive some collectors insane. Personally, I’ve always liked it, but that’s just me. For those that enjoy chasing tiers of super-premium base cards (i.e. Gold Label), this set is for you. I would definitely recommend trying a box of these, but not necessarily for the prices I saw in the stores on the ‘Bay. There are some bargains out there on this box (trust me!), just keep your eyes peeled! Also, if you have any of the Row 0 cards numbered to 500 or less, LET ME KNOW!

As always, thanks for reading and good luck with your breaks, new or old!
-John

In a post on Wax Heaven, Mario Alejandro said that 1998 Flair Showcase might be the most beautiful set ever. If not the most the beautiful, it’s certainly up there! Having always been a fan of this set since its debut (and since I’m secretly putting Row 0 together because I’m INSANE), I decided to make this the first of my “Old School Breaks.” This set features 120 players, with 4 cards per player, the 4 rows: 3,2,1, and 0. The 120 players are broken into 4 groups of 30 and each group has its own specific odds of acquiring a particular row card. i.e. It would be easier to find Row 3 cards of cards 1-30 than it would be of cards 91-120. I won’t go into all the details, but in short, Row 3 cards are the most common in general while Row 0 cards are the most rare (and all of these are serially numbered, ranging from 250-2000, depending on where they fall in the set). Anyways, some brief descriptions of the cards are as follows:

In this box I received 78 out of 120 Row 3 cards, with only 1 dupe! I received 29 Row 2 cards, 9 Row 1 cards, and 3 Row 0 cards. Stars from Row 2 included Maddux, A-Rod, Piazza, Chipper, Vlad, Smoltz, among others. The Row 1 cards were nothing to brag about, with Paul Molitor being the best. From Row 0, I got Curt Schilling out of 2000, Gary Sheffield out of 1000, and Jim Edmonds out of 500. I also got a Travis Lee Wave of the Future card (man, whatever happened to him?!?). I forgot to mention earlier that there’s an insert set called Perfect 10 (10 cards of each of 10 total players, NEVER seen one) and a parallel to the whole set called the Legacy Collection. These are limited to 100 (for everyone and every row) and feature a blue foil in the card’s font. Unfortunately, I did not have one in my box, but I still had a blast ripping it. I also didn’t get one of this parallel either, but maybe if you find a box, you can find one. 😉 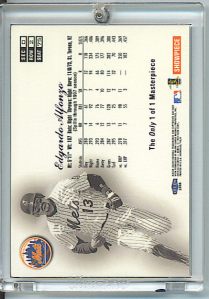 Thanks for the read. Feedback is appreciated as this was my first actual review.
-John