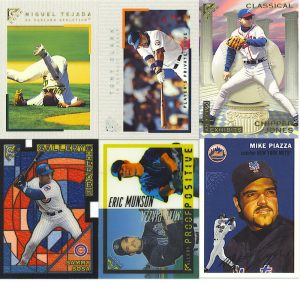 Topps Gallery has always been known for being an art-themed product, but before it went to being a strictly-painted set, Gallery had a very attractive base set with unique and vibrant photographs, to go along with some of the most unique (and coolest!) inserts the hobby has ever seen. Containing 24 packs of 6 cards each, a box of 2000 Topps Gallery can be had for very cheap, and it sure gives some bang for the buck! I recently picked up a box for $25 and was very pleased with the results. And here they are…

Base cards: In a similar fashion to 1999 Finest, this set is comprised of 100 base cards, with a subsequent 50-card subset. The cards in the subset are found 1 per pack and feature a veteran or rookie/young star. The veterans (cards 101-120) are noted as Masters of the Game while the rookies/young stars (cards 121-150) are noted as Students of the Game. In this box, I completed the base set 1-100 with 14 duplicates. From the subset, I received 24 different cards, with no duplicates (YES!!). By the way, check out that base card of Miguel “33 is the new 31” Tejada. Hilarious.

Player’s Private Issue: Seeded 1 in every 20 packs, this is the more-easily attainable parallel of the base set. What’s the less attainable parallel you may ask? How about 1/1 printing plates, seeded 1:1199 packs (yes, there were plates back then!). Anyway, the Private Player’s Issue features a silver font on the card’s front (as opposed to the normal gold) and are limited to just 250. I pulled a Tony Clark, serially numbered 159/250.

Gallery Exhibits: This is a very attractive insert set that I hadn’t even seen until I busted this box. Found 1 in 18 packs, this Chipper Jones card has got this kind of “Greek Gods exhibit” theme to it that really makes it stand out. This is a prime example of the cool, unique inserts found throughout the Gallery series.

Gallery of Heroes: These cards are GORGEOUS, and I challenge anyone to disagree. These cards feature the design of a stained-glass window you’d see at church. I pulled the Sammy Sosa in this set. These are found 1 in 24 packs. I’ll let the scan speak for itself.

Proof Positive: Each card in this set features a combination of a veteran player and a rising star at the same position. The concept is pretty much the same as the Mirror Image insert sets once found in Bowman’s Best. I beat the odds on this one, as these cards are only found in every other box on average. My card featured Mike Piazza and Eric Munson.

Heritage: Does this name sound familiar? Much like Topps Co-Signers, Fleer Sweet Sigs (and probably more that I’m not thinking of), Topps Heritage was an insert set before it became a set. In this particular set, the design was taken from that of 1954 Topps. They were seeded 1 in 12 packs and also feature a “proof” parallel which can be found 1 in 27 packs. I did not receive a proof parallel, but did receive regular Heritage inserts of Mike Piazza and Sammy Sosa. These Topps Gallery Heritage inserts are classic, IMO.

This box was definitely a blast to open. While it was a little strange seeing the same guys in my inserts (Piazza and Sosa), the combination of a cheap price and some superb inserts make this product a winner. You’ll also be able to put together a base set (minus SP’s) from a box, in all likelihood, and that’s a bonus I’d take any day. If you get the itch to bust some wax, I would definitely recommend 2000 Topps Gallery for the reasons mentioned above. The best part is, it’ll only cost you the same as a pack of UD Trilogy!