Big League Challenge Rafael Palmeiro 364/999 (He’s not pictured in any uniform so technically, this doesn’t really belong to anyone. I will randomly throw this in someone’s package.)
Studio Proofs Platinum Ryne Sandberg 10/10! (Cubs – Shoebox Legends)

The Donruss WS box will be posted later this afternoon. Hopefully, box #8 will get here in a few days…

EDIT: Sorry guys, I will have to wait until tomorrow night to post the results.

With a title like that, I suppose you’d assume that I acquired a Ric Flair autograph from Donruss Americana but that isn’t the case. However, I did acquire my first-ever autograph from the Americana line, a Private Signings card of John C. McGinley numbered to 50.

McGinley, a veteran of film, TV, and Broadway has been one of my favorite actors for a long time. He has appeared in tons of films such as Platoon, Wall Street, Se7en, The Rock, and Office Space but younger fans would immediately recognize him as Dr. Perry Cox from the hit show, Scrubs. Check out Mr. McGinley’s impressive resume at the IMDb.

The second part of this mailday features a pair of cards from a set I’ve been chasing for well over a year (closer to two actually). Those that have been paying attention to this blog know what I’m talking about…

With only 250 possible sets available, completing the Row 0 set from 1998 Flair Showcase has certainly been quite the challenge! With the acquisitions of two of the higher-tiered cards: Nomar Garciaparra (126/250) and Scott Rolen (184/250), I am now only three cards away from completion.

The three that I am missing are Mark McGwire, Frank Thomas, and Livan Hernandez.

Well, July has arrived so what better way to start the month than with a box of 2002 Studio! In 2002, Donruss put a patriotic twist on its Studio line with Old Glory in the background of every base card/parallel, a revamped Spirit of the Game insert set, and actual game-worn flag patches used in the wake of 9/11. Let’s bust this!

Base set: The base set is comprised of 200 short set cards, followed by 50 serially numbered rookies. Each card features a background with an American flag backdrop and some small city skyline photos placed on some film strip. In this box, I pulled 77 of the 200 short set cards (38.5%) without duplicates.

Rookies (/1500): Cards number 201-250 consist solely of rookie cards, all of which are numbered to 1500. There is no difference in appearance between these and the regular base cards with the exception of the word “Rookie” in the bottom right corner of the card. There were two rookies in my box: Kyle Kane (0773/1500) and Jason Lane (0011/1500). It should be noted that this set was extended by 25 cards in Donruss’ special The Rookies product. These 25 cards (cards 251-275) were also “rookies” numbered to 1500 and featured Mark Teixeira, Freddy Sanchez, and Chone Figgins among others.

Studio Proofs (/100): Studio Proofs is the name of the lone parallel found in this product. Mirroring the entire set, these cards feature a small holographic logo stamped on the front of each card and serial numbering out of 100 on the back. I pulled a card of Nick Neugebauer (086/100), who made only 14 Major League starts in his career, all for the Brewers. 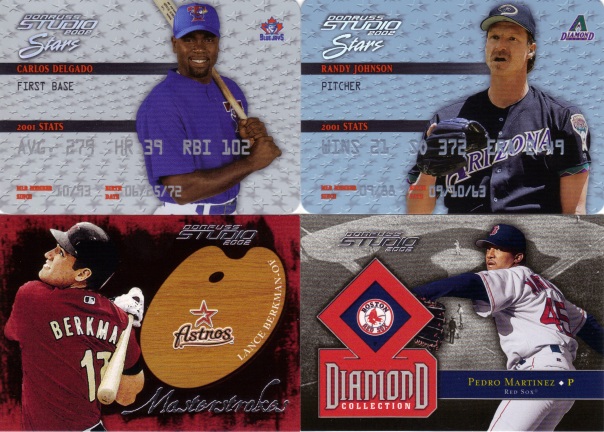 Studio Stars (50 cards, 1:5 packs): Everyone remembers the 1995 Studio set, right? You know, the cards that looked like credit cards? Well, they returned in insert form in 2002 and were available in three separate variations. The most common variation was seeded 1 in every 5 packs. As was the case in 1995, a Gold parallel also existed and was serially numbered to 250. The third parallel was brand new for ’02, a Platinum parallel numbered to just 50. This box yielded regular inserts of Frank Thomas, Tony Gwynn (who seems to follow me everywhere), and Carlos Delgado. I was also lucky enough to pull a Platinum card of Randy Johnson (41/50).

Spirit of the Game (50 cards, 1:9 packs): Spirit of the Game is a patriotic-themed 50-card insert set which depicts players holding their caps over their hearts (scroll down for scan). This set has multiple game-used variations:

Hats Off – Nearly half of the set is covered in this partial parallel which features game-worn hat swatches from players such as Jeff Bagwell, Lance Berkman, Craig Biggio, Magglio Ordonez, Carlos Beltran, and Andruw Jones. Each card is limited to 100 copies with the exception of Kazuhisa Ishii, whose card is limited to 50.

MLB Logo Variation – 17 cards have MLB Logo swatches embedded in them, each card a 1 of 1.

Flag Patch Variation – Only six cards featured an actual flag patch from a jersey worn by the player post-9/11. I witnessed a local shop owner pulling the Kerry Wood card back in ’02. If I remember correctly, these were jumbo cards randomly inserted as a box (maybe case?) topper. Seeing how there are only six cards out there, finding a scan of one of these is virtually impossible.

I did not pull any game-used cards in this box but I did pull inserts of Mark Prior and Carlos Lee.

Diamond Collection (25 cards, 1:17 packs): Diamond Collection inserts are found at a rate of one per box and feature an old-time black and white background. My pull was Pedro Martinez. All but one of the cards in this set is accompanied by an Artist’s Proof game-used parallel. Each of those features a swatch of game-used jersey or base and has a print run of 150 or 200 respectively. In true Artifacts/Piece of History fashion, the regular inserts have a team logo where the swatch would be.

Masterstrokes (25 cards, 1:17 packs): The second one per box insert is a Studio classic, Masterstrokes. These are painted inserts that look like they belong in the Topps Gallery line except they’re a little nicer in my opinion. My pull was of Lance Berkman. These inserts also have the Artist’s Proof game-used parallel, most of which feature a combination of a bat and jersey swatch numbered to 200. The cards of Ichiro, Albert Pujols, and Derek Jeter feature base and ball swatches and are limited to just 100.

Studio Classic (25 cards, /1000): Reminiscent of the inaugural 1991 Studio set, the red-bordered Studio Classic cards are some of my favorite inserts of all time. Check out that Lou Gehrig (0691/1000). I dare any baseball fan to tell me that doesn’t kick ass. Anyway, this set is filled with Hall of Famers and also has its share of parallels and autographs. There is a First Ballot parallel which has a print run based on the last two numbers of the player’s HOF induction year. For example, a Gehrig would be numbered to just 39. Autographs make up a partial parallel to this set as well. However, none have a print run higher than 20 and they’re all silver sticker autographs like the next card I’ll talk about.

Private Signings (varied numbering): Like I mentioned in my last post, over 200 players have autographs in this set with no print runs topping 250. With all the huge names in the set, I pulled Victor Martinez (168/250). I was happy with the pull, especially when considering how much filler is in this set (seriously, check eBay for these).

Collation: A+
I got exactly 90 cards in this box without a single dupe. Perfect!

Condition: A-
The cards came out of this box very clean (especially for having black at the bottom of each card), greatly surprised to see so few dinged corners, etc.

Pulls: A
I was very satisfied with the pulls in this box. According to the wrapper, inserts are found in every third pack on average. This box obviously contained a lot more. A low-numbered Randy Johnson and an autograph of a player who is still an active star brought the grade up a bit.

Value: B
There doesn’t seem to be a whole lot of sites holding boxes of 2002 Studio and the few that do carry them are asking $60 and up, which is a bit steep considering that there are only 90 cards in a box. The fact that there are only 18 packs in a box and only 5 cards per pack is probably the worst part of this product. The content inside was great, it’s the box configuration that needed work. Still, 2002 Studio, with its patriotic theme, added a nice twist to a product that generally was the same every year.

With the fourth of July less than a week away, I thought I’d showcase a hit from a product described as “a Star-Spangled Tribute to America’s Pastime,” 2002 Donruss Studio. The base cards featured the traditional Studio-style portrait shot of each player with Old Glory and some shots of the player’s home city in the background.

Randomly inserted into packs of 2002 Studio (and 2002 Donruss The Rookies) are Private Signings inserts. Private Signings is a 210-card skip-numbered set featuring autographs of the game’s top veterans and prospects. Each card is serially numbered to 250 or less, with the bigger stars being produced in much smaller quantities (usually 25 or fewer). Some of the big stars found in this set include Roger Clemens, Chipper Jones, Vladimir Guerrero, Frank Thomas, Pedro Martinez, Carlos Beltran, Manny Ramirez, and even Rickey Henderson.

This Victor Martinez card is numbered out of 250.