Just a few days ago, while browsing for some new box break material for this blog, I came across a box of some old Stadium Club for just $13 plus shipping. This box came from 1996, the year that SC went “extreme.” What? It says so right on the box! (link)

Base set: The base set in Series 1 is comprised of 225 cards. The first 180 of these are the short set, which are followed by 45 Team SC shortprint cards. On the backs of these “TSC” cards, players were given a special productivity rating based how many at bats they needed to create a run. The formula used for this was as follows: At Bats/(RBI+Runs+HR). The top five at each position (including DH) could be found in this set. These cards were seeded one per pack and were exclusive to Series 1. In this box I pulled 125 basic short set cards and 24 different TSC cards, for 66.2%. Between duplicates, triples, and even some quads, the extras count reached 80. 80!!!!

Before I move on, there’s one more look at some of the base cards. These are a few of my favorite horizontal photographs from the set, as well as TSC short prints of the 1994 MVP’s who were born on the same exact day in 1968. Revel in the awesomeness that is Stadium Club!

Extreme Players: Now, I’ll explain the whole “extreme” concept I mentioned at the beginning. 180 total players (90 from each series) had an “extreme player” logo stamped on the front of their card. As you can tell from the scan, these logos were stamped in either bronze (1:12 packs), silver (1:24 packs), or gold foil (1:48 packs).

How it Worked: Each of the “extreme players” were rated against one another based on a point system based on their final 1996 statistics. Players earned points based on these categories: home runs, RBI, stolen bases, batting average, wins, saves, and ERA. After season’s end, the top point-getter at each position, including both starting and relief pitcher, would be announced and if you held an “extreme player” card of any of the ten winners, you could redeem your card for a special prize. The prizes varied depending on which foil version of the winning card you owned.

This box yielded Bronze cards of Mark Grace and Heathcliff Slocumb, a Silver Joe Girardi, and a Gold Todd Worrell. It just so happens that Todd Worrell was one of the ten winners so if I pulled this card back then, I could’ve redeemed it for the special Gold Prize of Mr. Worrell. Oh well, I’ll just toss this in the Night Owl pile. 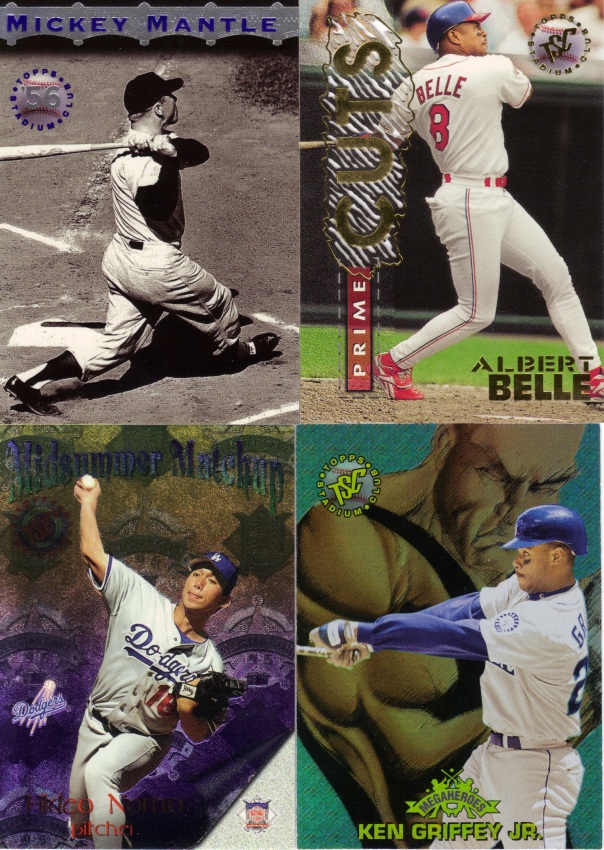 Mantle inserts (1:24 packs): Inserted at a one per box rate are a series of inserts paying tribute to the late Mickey Mantle. I know that many people are sick of seeing Mantle inserts, but I’m OK with these. These cards are fairly simplistic and the borderless photos look very good. Here a few other shots from this set. There are nine of these inserts found in packs of Series 1, one fewer than those found in Series 2.

Prime Cuts (1:36 Hobby, 1:72 Retail): Found in every third retail box on average, the Prime Cuts inserts feature laser cut technology (similar to that year’s Topps Laser set) and gold foil over the player’s name and the word “CUTS.” The back of my Albert Belle card reveals the years in which Albert reached his then-career highs in stolen bases, RBI, home runs, and five other categories.

Midsummer Matchups (1:48 Hobby, 1:24 Retail): It seems a bit strange that an insert would have more favorable retails odds than hobby, doesn’t it? That is just the case with the Midsummer Matchups inserts, found in every retail box but only every other hobby box on average. These dual-sided inserts feature the starters of the 1995 All-Star Game. The players are grouped together by the position they started in the game. These cards have a metallic finish to them and contain multiple ASG and league logos. Hideo Nomo occupies the front of this card while Randy Johnson can be found on the other.

Megaheroes (1:48 Hobby, 1:24 Retail): The final insert of this box contains the same exact pack odds that the Midsummer Matchups do, and it’s called Megaheroes. With a rainbow foil finish and illustrative background, these cards look like something out of the Metal Universe line. My pull was of Ken Griffey, Jr. Several backgrounds in this set are unique to the player depicted on the card. For example, Roger Clemens has a rocket background and Andres Galarraga has a “big cat” background. Then, there’s this Deion Sanders card, which pays tribute to another pro team he played for.

Final Thoughts/Grade: I thought I’d try something a little different. Rather than just talking about the product/box in general, I thought I’d assign an overall letter grade to each box I open from this point forward. This would apply only to the particular box I busted and wouldn’t necessarily reflect my opinion of the product as a whole. I will be judging these four aspects of each box:

Collation: How many base cards (including SP’s) from my box came with at least one duplicate? FIFTY-FOUR PERCENT! Enough said. Grade: F. This is a major peeve of mine as I like to actually build sets from boxes I bust.

Condition: Were there any quality issues, such as dinged corners and miscuts on the cards? Thankfully, there were very few issues with the cards’ condition. I believe there were only a couple cards with any real damage and they were just a couple of common duplicates. Grade: A-

Pulls: The inserts delievered as promised and then some! There were no guarantees on the Prime Cuts or Extreme Gold cards, but I pulled one of each. The inserts themselves were pretty fun. Grade: A

Value: I think this goes without saying. While boxes of this product will run for about $20 and up BEFORE shipping, I picked this retail box up for just under $20 AFTER shipping. For less than the price of your standard blaster box, I got over 200 cards, a nice chunk of the Series 1 set, nearly half of the Series 1 shortprints, and seven other inserts on top of those. Grade: A

Final Grade: B+. If it weren’t for the lousy collation, this box surely would’ve gotten an “A” for all the positives I just mentioned. I’m not the biggest set collector out there, but when I have a ton of cards from the same set laying around, I just have to go for it. And when trying to build a set, nothing drives me crazier than seeing the same damn cards in every other pack! Peeving dupes aside, this was still a very good box that shows how good Stadium Club can be when done right.

P.S. Make sure you vote on the You Make the Call! post below and tell me what product you’d like to see busted here!