I know I just broke some old Stadium Club a couple of boxes ago, but…….here’s more! This time I broke some from 1997, the debut year of the Co-Signers inserts. Maybe I’ll find one? 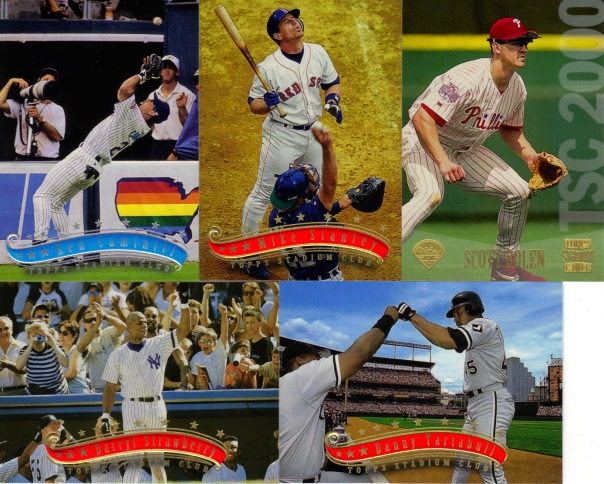 Base set: The base set is comprised of 180 basic cards followed by 15 “TSC 2000” shortprinted youngstar cards, which are seeded one per jumbo pack. I pulled 115 basic cards (63.8% completion) with 46 doubles and 3 triples. I also pulled 12 different TSC 2000 shortprints including Scott Rolen, Andruw Jones, Todd Helton, and Nomar Garciaparra.

Matrix (1:6 packs): Found at a rate of two per box, Matrix is a partial parallel which mirrors only a third of the base set. The first 60 cards of each series (numbers 1-60 and 196-255) are the only ones that are mirrored and the checklist is pretty solid. I pulled cards number 12 and 13 which feature Pedro Martinez and Jeff Bagwell respectively. I’m not really sure how to describe the technology used on these cards so I’ll let the scan do the talking.

Millennium (1:12 packs): Most of the inserts found in 1997 Stadium Club can be found in both Series 1 AND Series 2. The Millennium insert set is one such example with 20 cards inserted into each series. The players in this set are all young stars/prospects whose images are embossed on an all-mirrorboard background. I pulled Justin Thompson, a former Tigers pitcher. Some other notables in the first series include Derek Jeter, Chipper Jones, Carlos Delgado, and Edgar Renteria. Just a warning, these cards seem to be easily damaged.

Instavision (1:12 packs): Holograms! Who doesn’t love ’em? The Instavision inserts feature hologram images on a mock scoreboard that commemorate special moments from the 1996 season. My Barry Larkin card celebrates the fact that Barry became the first 30/30 shortstop in history that season. Some other moments celebrated in this set are the 20-strikeout game by Roger Clemens against Detroit and Derek Jeter’s infamous ALCS homer (a.k.a. The Jeffrey Maier home run), found in Series 2.

Final Thoughts/Grades:
Collation: C. The 49 doubles/triples are a bit high but seeing how that’s been the norm with these Stadium Club boxes, I was a little lenient with the grading. It was quite surprising not to hit any duplicates with the shortprints though. Also, the inserts delivered as promised so I can’t complain.
Condition: B-. The condition was good overall, but there were a few issues with a couple base cards (luckily they were doubles) and the Millennium insert, which has a HORRENDOUS back.
Pulls: B. There were some pretty solid names in this box. I was happy pulling the Larkin also as half the guys in the Instavision set are Mitchell Report guys.
Value: B. Whether it’s a jumbo or regular hobby box, one should be able to find an unopened box of ’97 Stadium Club for about $20 or less. For that price, one could expect a healthy starter set with a dozen shortprints, a couple Matrix parallels, and at the very least two other inserts like the ones I pulled. Pure Gold (1 in 3 boxes) and Co-Signers (1 in 8 boxes) are also possible pulls. I basically got the minimum with this box but it was still an enjoyable break overall.