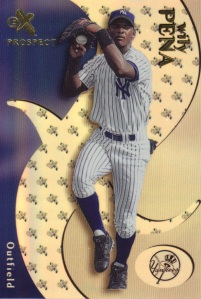 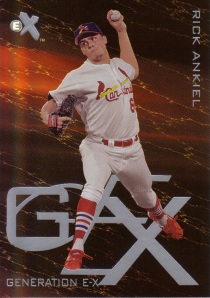 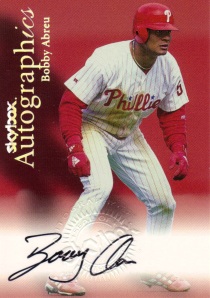 2000 E-X was a product I loved back in the day, and I mean LOVED. I recall opening tons of this stuff and having some moderate success. Some of my hits then were: an Edgar Martinez Genuine Coverage card (1:144 packs), a couple autographs, and some real sharp E-Xceptional inserts. I guess what really drew me to this particular product was that it had the beautiful cards that came along with the E-X name, but for less money. As much as I liked the clear cards E-X offered in 1998 and 1999, something about shelling out $5-6 a pack and just getting 2-3 base cards, with only an occasional sparse insert, seemed unsettling. The local card shop had 2000 E-X for about $4 a pack, but at least in every 3 packs or so, you got to look at something that wasn’t just a plain base card. Sheesh. I never did get to open an entire box at once back then, so I decided to do so now. For a hair over $50, I bought a box (24 packs, 3 cards per pack) on ebay and here’s what came from it…

Base cards: Compared to other years, this E-X set has a very short base set. There are only 60 basic veteran cards, followed by another 30 prospect cards. Each prospect card is numbered to 3499. The base cards are not clear like they were in the couple previous years, but are still very colorful, have a refractor-like front, and look very sharp. I received 57 of 60 cards to the base set with 6 duplicates and 2 prospects (Danys Baez: 3493/3499 and Brad Penny: 0904/3499). I already had the base set finished before opening this box, but if anyone can help me finish this second set, it’d be greatly appreciated. The cards I am missing are 1, 6, and 22.

Generation E-X: The most common insert in this product is Generation E-X. They are found 1 in every 8 packs. These cards feature a black background with a streak of red near the top. Originally, I thought this was an insert set just for prospects, but Derek Jeter, Nomar Garciaparra, and Alex Rodriguez (who were already stars) were included so….I guess the theme was stars under the age of 30 or something?! I have no idea. I received Alfonso Soriano, Tim Hudson, and Adam Piatt. Well, 2 of those 3 became successful big-leaguers. Not bad.

E-XCiting: Here we have a unique insert set in which each card is die-cut and made to resemble the player’s uniform. These are seeded 1 in every 24 packs and look AWESOME. I pulled a Randy Johnson card. You gotta love these kind of “outside the box” type of inserts. The name is appropriate as well.

E-Xplosive: Alright, so this one isn’t quite as exciting, but is still pretty cool nevertheless. These cards feature an explosion graphic and are limited to 2499. Once again, I got The Big Unit, numbered 1832/2499. On a side note, there seems to be a trend with me pulling inserts of the same player in the same box.

E-Xceptional: This is my personal favorite insert set. These card feature the same technology used in the “jambalaya” inserts in basketball (although these aren’t nearly as rare). There are 15 players in this set and each comes in 3 different colors. The common type is red and is numbered to 1999. The uncommon type is green and is numbered to 999. The rarest type is blue and is numbered to just 250! I pulled a red version of Nomar Garciaparra numbered 1006/1999. I may try to put at least the red set together one of these days. I love the looks of these!

Autographics: Last but not least is the well-known Autographics set. Altogether, 133 cards were randomly inserted into 5 different Skybox products: E-X, Skybox, Skybox Dominion, Skybox Impact, and Metal. The odds of finding an Autographics card varied in each product. In the case of E-X, they were seeded 1 in every 24 packs, the most generous odds of the bunch. There is also a purple foil parallel limited to just 50, but I did not receive one of these. My autograph was of “Little Sarge” Gary Matthews, Jr. This wasn’t quite as good as the Andruw I mentioned in my last post, but at least it was someone I’ve heard of. As you can imagine, there are some HUGE names in this set. There’s one thing I can’t understand though. Apparently, the Mark Bellhorn autograph from this set has the same BV as the Tony Gwynn and Frank Thomas! I guess some people REALLY wanted it for their ’04 Red Sox roster set?

In closing, boxes of 2000 E-X aren’t exactly the easiest ones to find. It took quite a bit of searching, but in the end, I was pretty satisfied with my box. If you are able to find a box (that’s not hideously overpriced), I’d say it’s definitely worth a shot. You’ll probably come close to completing a set and you’ll find an array of cards that look incredible. You’re pretty much guaranteed to hit an autograph, perhaps of one of the game’s top stars? If you’re lucky, you can pull a Genuine Coverage card, which could feature a jersey swatch from Ripken, A-Rod, Jeter, or Bonds, among others. And if you’re real lucky, an Essential Credential parallel could be awaiting you, like this one of Derek Jeter. The possibilities are seemingly endless so GOOD LUCK!