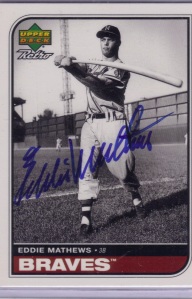 Alright, so maybe a single-card acquisition shouldn’t be labeled as a “mailday,” but this new addition to my autograph PC surely deserves its own post!

The card on the right is a Sign of the Times autograph of Eddie Mathews. This card was just one of thirty different autographs that could be found in packs of 1998 Upper Deck Retro. Inserted at a rate of 1 in 36, the print run on these cards ranged from 100 to 1000 and while none of the cards are serially numbered, this Mathews is limited to 600.

The remainder of the checklist is pretty loaded. Some of the names include:

Mathews signed his share of autographs for card companies before he died in 2001. If anyone’s looking to track one down, some sets to consider include 1999 SP Signature, 1999 and 2000 Greats of the Game, 1999 UD Century Legends Epic Signatures, and 1998 Donruss Signature Significant Signatures. None of those should run over the $40-50 mark (unless you’re looking at BIN store prices). In any case, those autographs are twice as cheap but yet twice as attractive as any cut signature of Mathews I’ve seen, and that’s a shame.

Randomly inserted into packs of 1998 Donruss Signature were Significant Signatures inserts, which featured beautiful on-card autographs of legends such as Yogi Berra, Eddie Mathews, Ernie Banks, Stan Musial, and Phil Rizzuto, just to name a few. Each card was limited to 2,000 copies, with the exception of Rizzuto, who only signed 1,000.

However, not all the cards were directly inserted into packs. Redemption cards were created for Sandy Koufax, Ozzie Smith, and Nolan Ryan. The redemptions (which had to be redeemed before the year 2000) were for special signed REFRACTORS with a print run of 2,000. However, some time after the product’s release, non-refractive versions of these three cards were found. They featured different photographs from their refractor counterparts, but still looked very sharp in basic foilboard. While Koufax and Ozzie once again had 2,000 cards out there, there were only 1,000 of the non-fractor Nolan Ryan card.

Oh, and if you’re reading this Jason, this Ryan is your prize for winning the contest. Congratulations and enjoy!

With a title like that, I suppose you’d assume that I acquired a Ric Flair autograph from Donruss Americana but that isn’t the case. However, I did acquire my first-ever autograph from the Americana line, a Private Signings card of John C. McGinley numbered to 50. 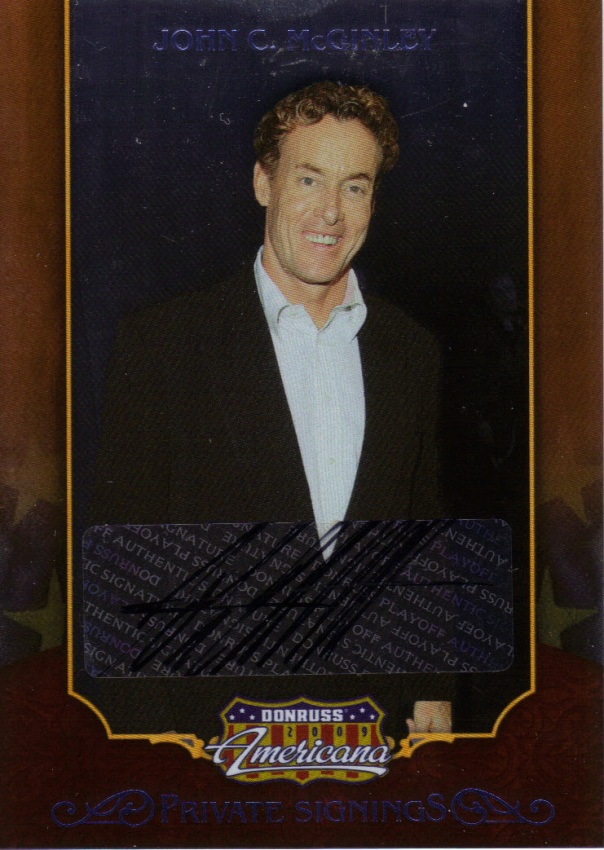 McGinley, a veteran of film, TV, and Broadway has been one of my favorite actors for a long time. He has appeared in tons of films such as Platoon, Wall Street, Se7en, The Rock, and Office Space but younger fans would immediately recognize him as Dr. Perry Cox from the hit show, Scrubs. Check out Mr. McGinley’s impressive resume at the IMDb.

The second part of this mailday features a pair of cards from a set I’ve been chasing for well over a year (closer to two actually). Those that have been paying attention to this blog know what I’m talking about…

With only 250 possible sets available, completing the Row 0 set from 1998 Flair Showcase has certainly been quite the challenge! With the acquisitions of two of the higher-tiered cards: Nomar Garciaparra (126/250) and Scott Rolen (184/250), I am now only three cards away from completion.

The three that I am missing are Mark McGwire, Frank Thomas, and Livan Hernandez.

Five Down, Five to Go!

My quest to complete the Row 0 set of 1998 Flair Showcase has almost come to an end. As I mentioned in the last post, I was sitting on 110 of the 120 Row 0 cards. With the most recent mailday, the wantlist was cut in half from ten to just five. The final five (/250) missing from my set are:

Unfortunately, the Rolen just ended on eBay a few days ago and I missed out on it. If anyone knows where I can find any of these, please let me know!

Thanks again for hooking me up John!

Like I previously mentioned here, I’ve been working on the Row 0 set from 1998 Flair Showcase (for over a year now) and the one man who has helped my set progress more than anyone has been a collector by the name of John Walsh. Once again, John has hooked me up with quite a few of the toughies from the set. For those that don’t know, there are only 250 possible Row 0 sets! I described the fracturing of the set/print runs in this earlier post. The cards I received this time were: 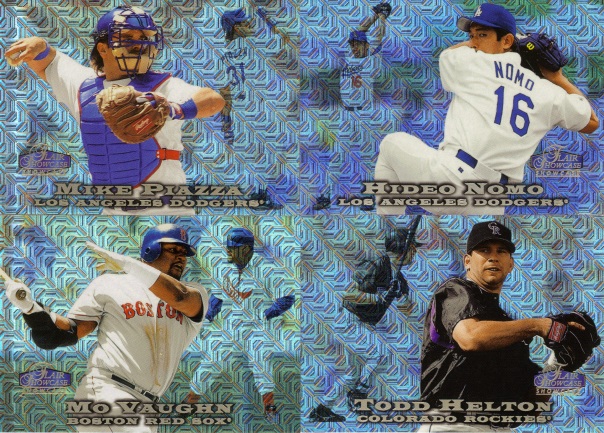 All of these cards are serially numbered to 250 with the exception of the Jeff Bagwell and Hideo Nomo cards, which are numbered to 500. I’m very happy to get these cards off the wantlist, especially the Hideo Nomo (we all know how much rare old inserts of him can go for)! I am now at 110 Row 0 cards, just 10 away from the set! Thanks again John!