Hey everyone, John here! I had to update everyone on a long outstanding project of mine that has FINALLY been put to rest! Back in September 2007, I decided to do something I thought was crazy and attempted to collect all 120 1998 Flair Showcase Row 0 cards. Seeing how there are only 250 possible sets to be completed and many individual cards are likely sitting in collectors’ personal collections, I knew it wasn’t going to be an easy task. For several years, I had been stuck needing just three cards to complete my set: #3 (Frank Thomas), #9 (Mark McGwire), and #16 (Livan Hernandez). I had come close to winning a couple of these cards in the past but to no avail. To be honest, I had pretty much given up on the set until my OSB co-author Matthew reminded me about it, asking if I had ever completed the set on this old mailday post. Shortly thereafter, I started scouring eBay once again and was fortunate enough to find a seller who had ALL THREE cards I needed. Needless to say, I did whatever it took to make sure those cards landed here! To show you how difficult this was, here’s the breakdown of this set’s print run:

All the years of searching through various online hobby forums, eBay, Sportlots, and others I can’t even think of right now has paid off! The entire set has been scanned to my Photobucket account and can be found here. But let me just post a teaser pic for you guys here. I know there’s at least one card on this page that you would love to have Matthew. 🙂 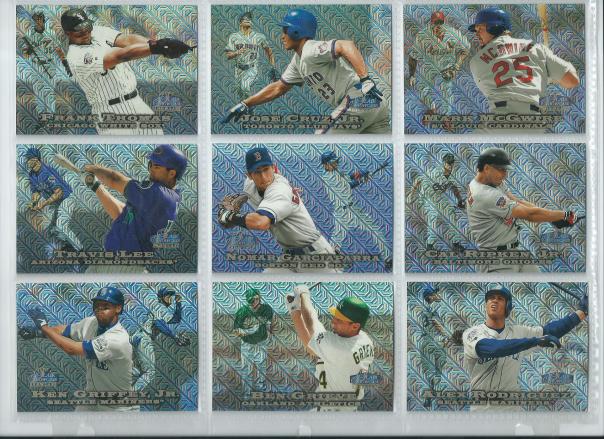 Even though the concept of the autographed card on ball material didn’t originate with Upper Deck, one can say they certainly took the idea to heights that made them very popular with collectors. Today, we’ll look back at what turned out to be a pretty groundbreaking insert, the original Sweet Spot Signatures set.

Each box of 2001 Upper Deck Sweet Spot consisted of 18 packs and each box guaranteed to land a game-used jersey card, one game-used bat card, and either a game-used base card or a Sweet Spot Signature card in addition to a special cross-brand Joe DiMaggio box topper pack. This Paul O’Neill card has been one of my favorites in my personal collection for years and luckily for me, the ink on this card has managed to hold its own, which is more than you can say about some of some the cards produced in the years that followed. This card is one of 53 in the set and other subjects include Ken Griffey, Jr., Alex Rodriguez, Nolan Ryan, Stan Musial, and even cut ball cards of Ty Cobb, Joe DiMaggio, and BABE RUTH!

Boxes of 2001 UD Sweet Spot are pretty difficult to find and when they surface, they can rarely be found for under $200 so keep in mind before you make a purchase, that your big box hit may be of Mike Lamb.

First off, I’d just like to thank anyone who has been reading this blog though the years. The fact that my reviews still are still gaining views and comments years after they’ve been posted online (especially after a long dormancy years ago), means a lot to me. I especially want to thank Matthew for his amazing work and keeping the blog alive with new content. Since he can’t have all the fun, I decided to bust a box of 1996 SPx baseball today. Old school SPx cards are some of my all-time favorites! Anyway, I may be a little rusty at this (after it’s been SIX years since I’ve done a review) but here goes nothing!

Base set: The base set is comprised of 60 cards. Each card features features a small action shot of the player as well as a close-up and second action shot using holoview technology. The perimeter of each card features a die-cut design and a special color corresponding to the player’s team. In this box I received 29 base cards, completing 48.3% of the set in the process. I did not receive a single duplicate.

This set features some of the game’s best of the mid ’90s but it doesn’t differ very much from the base set. 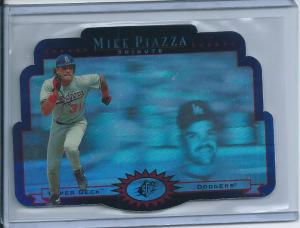 Like I stated earlier, I received no duplicates in this box. Those that were paying close attention may have noticed that I actually received an extra card in this box. One pack had two base cards instead of one and brought my total to 37 instead of 36. 🙂

I was a little worried that between all the die-cut edges and foil that I could end up with several damaged cards but this box was actually relatively kind! Aside from some damage on the back edge of one of my base cards and a severe centering issue on another, the cards were in excellent shape.

I really can’t complain here. I received both Ken Griffey, Jr. and Mike Piazza commemorative cards as well the one gold parallel I wanted more than any other in Jeter. I was also happy to get a second Yankee gold parallel in Boggs. A different Bound for Glory insert would’ve been nice but I still can’t complain. Realistically, I did about as well as I could without pulling one of the very rare autographed Commemorative cards, both of which are seeded 1:2000 packs.

This was a very fun break for the price of about $34 after shipping. Many other sellers online are asking for anywhere between $45-65 not including shipping. You will get a pretty decent starter set for a very attractive product as well as a few cool inserts and parallels. If you are really fortunate, you can pull a great early certified autograph of a member of the Hall of Fame Class of 2016.

For a complete checklist of this product, click here.

Hi Everybody! (Plus a Question)

….(Hi Dr. Nick!)…First off, happy Labor Day to all in the blogosphere! Secondly, I just wanted to say hi to all of you and see if I still show up on your feeds haha! For those who have been wondering what I’ve been doing for the past few years, I’ve gotten married and moved into a new house ,and have just been working like hell! Unfortunately, I no longer collect Martin Brodeur or bust old boxes, yet I still do get the occasional comments and e-mails inquiring about old products so that leaves me with a question for you:

Does anyone want to become a contributor to Old School Breaks?

It’s been more than two years since the last post on this blog. In early 2012, I received an e-mail from a longtime fan of the blog asking if I’d be interested in letting someone post on the blog to “keep it alive” so to speak…Seeing how Matthew had the same interest and passion for writing about the older products that a lot of people had missed during their collecting hiatus, coupled with the fact that he was a pretty good writer, too, I gladly accepted him. Unfortunately, his schedule and other commitments didn’t afford him the time to contribute to the blog and I, myself, have been guilty of ignoring my own creation so THIS POST IS TO ONLY GAUGE INTEREST IN BECOMING A CONTRIBUTOR. If there’s interest, I may invite one or two of you to actually write for the blog! Let’s revive Old School Breaks!

In 2001, for the very first time, Topps Gallery featured an all-painted set. Every card, from the base set and autographed and game-used sets, was painted. Among these sets is the Heritage Game Jersey set, which you may recognize as being patterned after the 1965 Topps set. In total, there are five players on this set’s checklist: Greg Maddux, Pedro Martinez, Orlando Cepeda, Willie McCovey, and Vladimir Guerrero (who was available only via redemption). In addition, Cepeda and McCovey had autographed variations limited to just 25 copies (Cepeda was a redemption). Heritage Game Jersey cards were inserted at a rate of 1 in 133 packs. That’s only 1 per every 5.5 boxes of Heritage!