Old School Hits: 2000 UD HoloGrFX A Piece of the Series 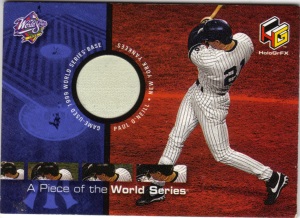 Normally, I’m not much of a fan of game-used cards that feature non-personal items on them such as balls, bases, and DIRT, but this particular set is a very special one. A Piece of the Series is a 12-card set found in 2000 UD HoloGrFX. While the product itself is nothing noteworthy at all, this set is (in my opinion) legendary. These cards were seeded only 1 in every 431 packs on average and feature some of the biggest stars of the New York Yankees and Atlanta Braves, who met in the 1999 World Series.

The reason this set is so special is that the swatches are of actual game-used bases from that particular World Series. There are several World Series-themed game-used sets out there (for example: 2002 Stadium Club World Champions, 2001 UD Subway Series among others), but this is the only one (to my knowledge, anyway) that specifically states that the material on the card was actually used in a World Series. I didn’t know this before checking out my friend Ravi’s page, but John Rocker was slated to be a part of this set, but was pulled after all the idiotic comments he made at the time. Therefore, only 11 cards found their way into packs. If you’d like to see scans of the entire set, check out Ravi’s page here. He has finished this entire set!

As for myself, I only own the Paul O’Neill at the moment. I used to have the Chipper, but traded it away (sorry dayf if you’re reading this). It should be noted that there is also an autographed partial-parallel to this set. These are randomly inserted into packs and four of them come with a variation which is limited to the player’s jersey number. These four are: Paul O’Neill (21), Tino Martinez (24), Brian Jordan (33), and Tom Glavine (47). Additionally, Bernie Williams, Mariano Rivera (and of course John Rocker) do not have an autographed version.

Posted on November 12, 2008, in Old School Hits and tagged 2000, A Piece of the Series, HoloGrFX, Paul O'Neill, Upper Deck. Bookmark the permalink. 5 Comments.