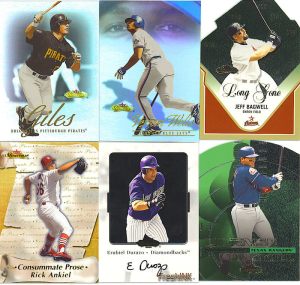 Hello everyone! I know it’s been a while, but I’m back with more breaks! Today I will be reviewing 2000 Fleer Showcase Baseball. I have to admit I’m a little torn about this product. I’m a HUGE fan of old Flair Showcase products, but to me, 2000 marked “the beginning of the end” for this great product. Evidently, Chris from A Pack a Day echoes the same sentiment. From 1997-1999, Flair Showcase was unique in that it had a multi-tiered set with all kinds of collectibility. With each player having 3 or 4 different cards, it made it fun to go for all the cards of your favorite player or set, all of which looked awesome. If this sounds familiar to you, you may remember my earlier review of 1998 Flair Showcase. In 2000, Fleer went with just one base set, with no tiers, but with numbered prospects. This year also marked the first time the product had game-used and autographed cards randomly inserted. But being the sucker for the cards with the black and white background/mirror finish that I am, I decided to bust a box anyway. Don’t get me wrong. I still enjoy this product, just not as much as I enjoy its predecessors. Each box contains 24 packs of 5 cards each. I picked one up online recently for $45 (plus shipping, I should note that the prices I give in these reviews are what I paid WITHOUT shipping unless I have noted so) and here are the contents:

Base set: In typical Flair fashion, these cards have a black and white background and refractor-like finish. The font is gold and larger than in the previous sets. The base set consists of 100 veteran cards and 40 prospects. Of the prospects, the first 15 are numbered out of 1000 while the rest are numbered out of 2000. There’s also a variation to the prospects called Showcase First. These cards are horizontal are limited to 500. My box yielded 98 percent of the basic 1-100 set with 5 duplicates. The cards I am missing are 49 and 57. I pulled prospect cards of Vernon Wells and Carlos Guillen, both of which are numbered to 2000. I also got a “Showcase First” card of Mark Mulder.

Consummate Prose (1:6 packs): This is the most common insert set found in this product. Found 4 per box, these cards feature an old, torn scroll for a background and a gold color scheme. I pulled cards of Jeff Bagwell, Chipper Jones, Rick Ankiel, and Mark McGwire. McGwire may not be here to talk about the past, but I am. 😉

Noise of Summer (1:10 packs): Oh look, another lame play on words by Fleer. These card are predominantly orange and yellow, and there’s really not a lot to them. I received Alex Rodriguez, Derek Jeter, and Jeff Bagwell (again!).

Final Answer (1:10 packs): Ok, I understand that Who Wants to be a Millionaire was one of the hottest primetime shows (if not the hottest) back then, but this insert set just looks silly to me. I admit I used to be an avid watcher of the show, but I didn’t want to see it clashing with sports cards! These inserts are green and feature the player in a mock television screen, with a ton of little question marks in the background. Let’s see. Question marks? Check. Green? Check. My gosh, The Riddler was working for Fleer?!? Check these out for yourself. The backs of these cards do provide some interesting tidbits though. Because of these cards, I learned that Sammy Sosa’s most surprising dream was to win the Powerall lottery and buy the Cubs! Aside from Sosa, I also pulled Vlad Guerrero and Cal Ripken, Jr.

Long Gone (1:20 packs): Here’s the first of a few die-cut cards I pulled from this box. I like this one personally. The card is cut to resemble the field of the player’s home stadium and even lists the dimensions of each field! The player I got here was…..yep, Jeff Bagwell! (man, it’s a Bagpipes hot box! Where’s that Houston Collector when I need him? 😀

License to Skill (1:20 packs): Here’s a nice green die-cut insert that’s got a “bulls-eye” theme to it. My player was Ivan Rodriguez. Hey, where’s my Jeff Bagwell?? On a side note, they seemed to like the color green when designing the inserts for 2000 Showcase.

Club 3000 (1:24 packs): Ah, here we go again, a Club 3000 insert. I discussed the details of this set in my Fleer Focus review, but for those too lazy to scroll down, just click here. Once again, I got a Cardinal, this time Lou Brock. And once again, there were no game-used swatches to be found. It’s still a nice insert though.

Fresh Ink (1:24 packs): These autographed cards were seeded 1 per box and featured a pretty nice checklist. Unfortunately, I got Erubiel Durazo, who seemed to show a little bit of promise a few years ago, but got injured and is pretty much obscure now. These are the only cards you’ll find here that lack any color. The player is featured in color, has a silver box surrounding him, and a white border surrounds all that. It’s just a little on the blah side if you ask me. Of course, I probably wouldn’t have minded as much if I had a better pull, but you can’t win ’em all.

Final Thoughts: Overall, if I had to rank Flair Showcase by year, 2000 would probably be somewhere in the middle (UD made it GARBAGE). It’s not a particularly bad product. The cards look good and most, if not all, of a basic set could be completed with just one box. You’ll find 1 autograph per box, a game jersey card in every 3 boxes, and a Sweet Sigs ball auto (think Sweet Spot) in every 10.5 boxes. Fans of the older multi-tiered Flair Showcase sets (like yours truly) will be disappointed with this set while those looking to score a nice pull may enjoy it more. The fact that there is only 1 set and that “Legacy” parallels are virtually impossible to find (only 20 of each compared to the customary 100) are a downer in my personal opinion, but it all depends on your personal taste. If you decide to try one of these boxes, hopefully, you’ll have a better break than me!